Since Ebel was appointed Overland Park’s fifth city manager in January 2011, Overland Park has experienced tremendous growth including redevelopment of the downtown, improvements along the Vision Metcalf corridor plus the addition of numerous mixed use and entertainment amenities throughout the city. Soon after becoming city manager, Ebel worked with frontline staff, supervisors and department managers to establish “Living OP,” which focuses on six core values: integrity, service commitment, respect, stewardship, relationship building, and pursuit of excellence. Ebel has led the community through some of its most challenging times including the economic recovery following the Great Recession and, a decade later, the COVID-19 pandemic.

In nominating Ebel for the award, colleagues emphasized his qualities of being selfless, committed, ethical, inspiring, compassionate, modest, thoughtful and strategic. They noted he has devoted himself entirely to the future of his community, to the efficacy of its city government and to the welfare of its citizens. 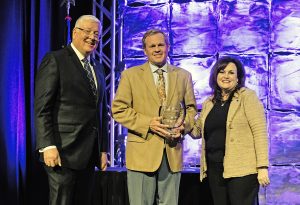 We bring people together. Lead the hard conversations. Tackle the big issues. We work every day to make Overland Park the best place to build a business, a career and a home.