This Week in Topeka

The 2021 Session is transitioning from the early bill introduction phase into a more committee intensive phase where bill hearings take center stage.  Committee chairs are actively cueing up bills for consideration and working with conferees to iron out differences before sending bills to an early grave or further consideration by the full House and Senate.

The deadline for bill introductions by individual legislators and committees is approaching next week.  Once this deadline arrives the number of bills being introduced will slow down but not stop completely as certain committee remain exempt from this deadline.

Unemployment Trust Fund - discussion regarding modernization of the state’s unemployment system got underway in earnest with introduction of HB 2196. The House Commerce Committee spent several days this week getting input from the Department of Labor and key stakeholders in preparation for two days of hearings on the bill next week.

Proponents of the bill will be able to testify before the House Commerce Committee on Tuesday, February 9. Opponents are scheduled for Wednesday’s Committee meeting.

The Chamber’s February Public Policy and Advocacy Committee meeting will feature Phil Hayes, one of the state’s leading experts on this topic. If you are interested in learning more about the unemployment system and the proposed fixes suggested in HB 2196, register here to join this virtual committee meeting. The meeting begins at noon next Friday, February 12.

Mr. Hayes is Vice President of the Arnold Group, A Human Resource Company, and also serves as Chairman of the Kansas Employment Security Review Board with the Kansas Department of Labor. He recently served as a Kansas Society for Human Resource Management (SHRM) Director and has been affiliated with local, state and national SHRM organizations for more than 20 years.

Unemployment Fraud – Legislators are hearing from constituents about unemployment fraud and the frustration was evident in hearings with the Department of Labor this week. While fraud concerns have been front and center for many months, the issue received more attention recently as IRS Form 1099-G documents hit mailboxes across the state. 1099-G forms contain details on the total amount of unemployment compensation received by claimants who legitimately received benefits last year. Potential fraud victims may also receive 1099-Gs and receipt of the form may be the first indication that their identity has been compromised.

This week the DOL enacted new identify verification checks that appear to have stopped thousands of potential fraud cases from occurring, but it doesn’t impact previous fraud attempts nor is it fail-safe. The DOL recently released guidance for identity theft victims and filing 1099-G disputes. For details, click here.

Framework for Growth – The Kansas Department of Commerce unveiled its new roadmap for growing the state’s economy and workforce when It presented the Framework for Growth report to the Senate Commerce Committee this week.  The last economic development strategic plan prepared for the State of Kansas - the Redwood-Krider Report – was authored in 1986.

The unveiling of the new plan is an important step for the Department of Commerce in laying out its vision and strategy for the future of Kansas’ economy. To read the report, click here. Lawmakers will have more opportunities in coming weeks to visit with Commerce officials and stakeholders to discuss the findings and develop steps to correct weaknesses and capitalize on opportunities identified in the report.

Taxation – the Senate Assessment and Taxation Committee held a hearing on SB 50, a bill to levy sales and use taxes on transactions through marketplace facilitators. The 2018 U.S. Supreme Court decision in the South Dakota v Wayfair case clarified that states could assess sales and use taxes even when a physical nexus does not exist.

Thirty-eight states, including all of Kansas’ neighbors except Missouri, have adopted provisions to level the playing field between online retailers and the brick and mortar stores who have invested in their communities.

HPIP offers a 10% tax credit to employers who pay above average wages and meet other qualifying criteria including employee training provisions. The KIT and KIR programs offer incentives for employers who grow or retain jobs that require advanced skill sets. Over time the programs have become linked and employers are using precious KIT and KIR training dollars solely to qualify for the HPIP program. SB 65 decouples the programs, allows each program to operate independently and provides for a greater return on investment for each program.

The Angel Investor Tax Credit is designed to incent investment in innovative Kansas companies that often find traditional working capital more difficult to obtain. The bill extends the program until 2026 and increases the maximum total allowable tax credits from the current $6 million to $8 million by 2026.

The Angel Investor Tax Credit was most widely used by investors from Johnson County who accounted for $21.2 million (about 56%) of the in-state investment during the 2015-2018 period covered in the November 2020 Legislative Post Audit Report on the program.

Funding for the program comes from the Expanded Lottery Act Revenues Fund and appropriates $3.5 million per year to the three universities with a condition that the schools provide matching funds. The three schools have surpassed their goals for the program and collectively increased the number of engineering graduates by 56% since the onset of the program. Data from the schools show that 95% of the engineering graduates are employed in the workforce or are seeking additional professional education.

The program is heavily supported by the cadre of world-class technology and engineering firms that call Kansas and the Kansas City metro area home. 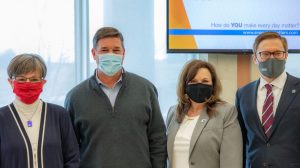 The Chamber first adopted a position in support of expansion in 2013 when the Board considered the economic burden of uncompensated care - estimated to be as high as $22 billion - and the increasing cost of providing health insurance benefits to employees.

Nearly half of all Kansans get their health coverage through employer sponsored plans but each year the increased costs make it harder to sustain the benefit – especially among smaller employers who are facing severe financial pressure. Evidence is clear that employees with appropriate health coverage have increased productivity in the workplace.

Providing affordable and accessible care for the 150,000 Kansas who currently fall in the coverage gap would drive $1 billion in new federal spending in the state and create 13,000 new jobs.  Further, the expanded program would provide relief for hospitals across the state who are facing major financial pressures as they provide care in all corners of our state to people with and without insurance coverage.

Currently 38 states, including all of Kansas’ neighbors, have expanded Medicaid. The Governor’s proposal seeks to use revenue from the authorization of medical marijuana to cover the state’s cost of expansion. The Chamber has not taken a position on the medical marijuana component of the proposal.

Next Week / Bills of Interest

Next week legislative committees will continue to work through the numerous bills that have been assigned to them for consideration. Floor action, which has been somewhat limited thus far, will pick up a little steam as more bills begin to emerge from committee.

SB 115 would authorize a county to abate or credit property tax when commercial property is negatively affected by temporary government restrictions during a state of emergency. SB 149 and HB 2142 also address this issue.

HB 2186 would allow for single sales factor apportionment of business income instead of the current three factor method.

To read previous This Week in Topeka reports, CLICK HERE